It was only a slight snowfall, but the Lower Locust (LoLo) Street area sidewalks were not cleared of snow yesterday afternoon. You can see the side walks were cleared up to a certain point.

Columbia Borough School District, Columbia, PA Wednesday Morning: School is closed – All evening activities for this evening are canceled – Other closings and delays at WGAL-TV8 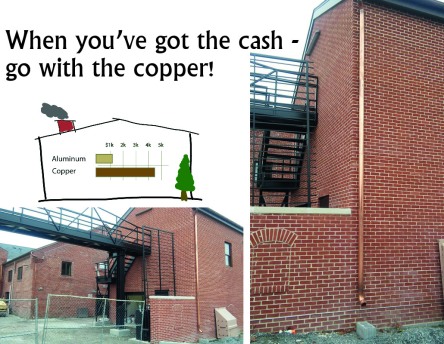 Those copper downspouts like the ones at the Columbia Water Company are valuable – there’s a report in today’s LNP – Always Lancaster‘s POLICE LOG: “LANCASTER TWP.: Seven copper gutters worth $1,937 were stolen between Jan. 9 and 14 from Wheatland Presbyterian Church, 1125 Columbia Ave.”

In today’s editorial, LNP – Always Lancaster criticizes the obfuscation and lack of transparency of our elected public servants in the Pennsylvania Senate. These fine folk are interviewing candidates for an “an impending judicial vacancy on the county’s Court of Common Pleas” and  “do not intend to release the names of the applicants ‘out of respect for those who contacted them.’” We’re shaking our heads, and in a democracy, too.

“Corporations won big in the Republican tax bill when their tax rate was lowered from 35 percent to 21 percent. But considering that many corporations never really paid anywhere near that 35 percent rate thanks to loopholes, exactly how big did they win? ‘The Tax Cuts and Jobs Act slashed the statutory rate but did very little to close loopholes, so, the effective rate will be surely much lower than the new statutory rate,’ Josh Bivens, research director at the Economic Policy Institute told us. His estimate? ‘The effective rate will all but surely dip below 15 percent and get close to 10 percent.’ According to the Penn Wharton Budget Model, the average effective tax rate for corporations will be about 9 percent in 2018 but go up to 18 percent by 2027, thanks to some of the provisions that will expire over the next 10 years. Now if only the middle class could get that kind of a break.” – MarketPlace