Citizens, property and business owners galvanize to have council consider elimination of loan funds and repeal of tax increase

Television news crews and over 75 Columbia citizens and owners of properties or businesses in Columbia were in attendance at this afternoon’s citizens’ meeting at a private home at 500 Chestnut Street. The assembled met to discuss and learn more about issues that have produced consternation and questions.

They also came to sign a petition that is asking the borough council to: 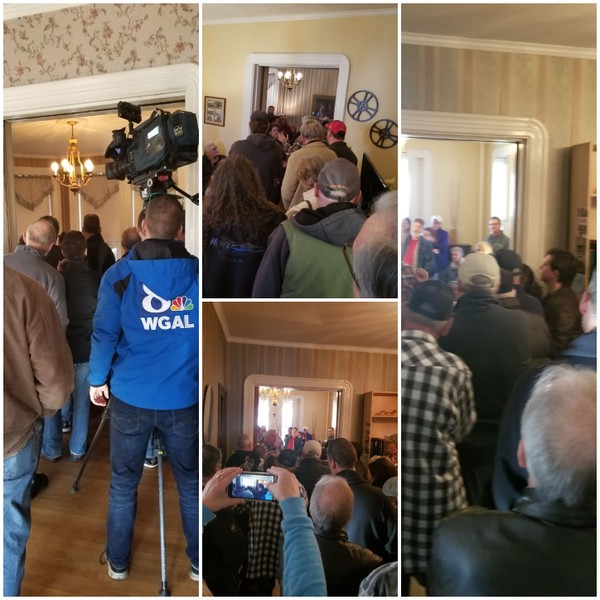 Borough councillors in a 7-0 vote in at the March 12, 2018 council meeting approved a motion to “amend the first sentence of Section 4 of Ordinance 897 to read as follows: Section 4. To be eligible for a loan from the Borough of Columbia Commercial Revolving Loan Program, the loan must be for the purchase, ownership and/or renovation of a commercial or industrial building withing the Borough of Columbia or for the purchase of equipment, other business assets, general working capital, contract financing, leasehold improvements, and other general and customary business uses. The motion was introduced by Kelly Murphy and seconded by Cleon Berntheisel (sic).

At the December 13, 2018 council meeting, the councillors approved a motion to fix the sum of 8.0 mills on each dollar of assessed valuation which amounts to $0.80 on each $100.00 of assessed value.” Minutes for that meeting have not yet been accepted nor have draft minutes been posted at the borough Website.

The citizens, property and business owners had sincere questions and Norm Meiskey, a former Columbia Borough Manager, was on hand to explain the specifics of their questions.

Many of the people in attendance heartily endorsed and applauded this newly coordinated Concerned Citizens for a Better Columbia and overwhelmingly voiced their intention to come to the next borough council meeting to demonstrate their support for the petition they’d endorsed.

Nearly 1,100 signatures have been collected and have been or will be presented to the councillors. Most of the citizens, property and business owners engaged in conversations and wanted to learn more about the council’s actions during the two hour meeting.

This FOX43-TV news report is from December 20, 2018 when the petition was first circulated.