The agenda for the first council meeting of 2019 is posted at the Borough Website. 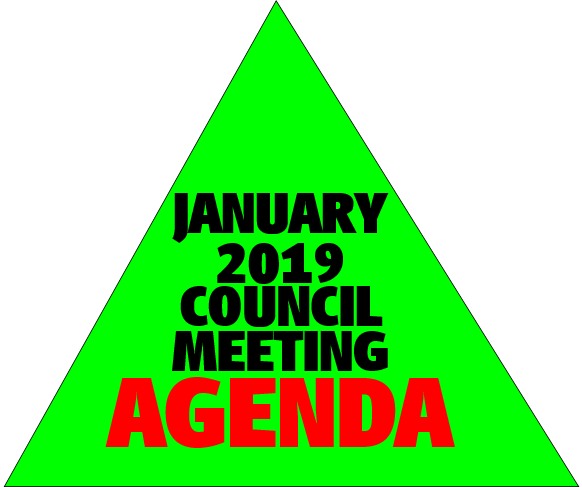 So, too, are minutes — that appear to be DRAFT minutes — for approval. This signals a change from the 2018 practices.

Among the extensive list of agenda items for the January meeting agenda are these items of interest:

“Residents and taxpayers of the borough have the right to comment on matters before or matters of concern before council (Section 710.1 of the Sunshine Act) during the public participation segment during the public comment portion of all regular and special meetings.

“The president shall review the rules of meeting decorum with council and the citizens and copies shall be provided in the chambers at every council meeting.

“Residents and taxpayers of the borough wishing to address council must state their name and addresses for the record.

“A resident of the borough or taxpayer of the borough has the right to address council via the president subject to any time limit established by council.

“The president shall be the spokesperson for council and he may ask questions to council
members or may refer the question to a committee to research.

“There shall be no interruptions when a member of the public has been granted the floor by the president of council.

“The president of council cannot turn off the microphone or remove a citizen because he doesn’t like his comments about council or the staff.

“The president shall attempt to answer questions during the public comment period, however, if he needs more information then he should note the question and tell the citizen that he will refer it to a committee and respond to the speaker at a future date.
If the meeting is running long and there’s still a crowd who wants to speak then the president shall schedule a special meeting to take further comments per the Sunshine Act.| – (SOURCE: ANY BOROUGH COUNCIL SAMPLE RULES OF ORDER, Pennsylvania State Association of Boroughs)