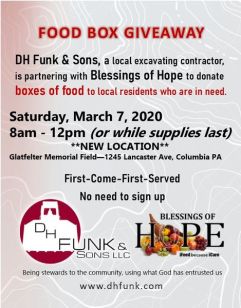 Starts at 7:00 pm | Tonight’s council meeting likely will be a full house event’—  click here to see the agenda — though meetings typically are live-streamed at the Columbia face book page for viewing from your home or anywhere.

OPINION: Better word choice | We really think whomever advises this brand new new borough council would have thought this one through. The choice of words used at the borough website and facebook page really makes this borough manager situation look like a banana republic coup rather than a transition created by who knows what. In this democratic republic, citizens are not used to anyone “taking over” a government leadership role. We’re more prepared and accustomed to having someone elected, appointed or assuming a position in an orderly manner.

SOURCE: from a promotional message in The Villager, a Towson, Maryland community publication. The Villager is a non-digital, “hold-it-in-your-hands” publication produced by a logn-time professional newspaperman.

A shared content (paid) example | “Embracing the Unexpected: The Cultural Hotspot of Lancaster City and Prima Theatre” This is an example of a paid news item at Lancaster Online. Because it’s paid doesn’t necessarily diminish the message. In fact, Prima is a great new theatre concept in Lancaster.