Area Inspections | Food serving inspections conducted by the Pennsylvania Department of Agriculture’s Bureau of Food Safety and Laboratory Services in the past week include: 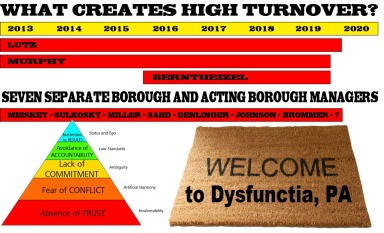 facebook post | A facebook post may have pointed to one of the causes of the difficulty that Columbia has: the abbreviated tenure of borough managers. Consistency of leadership, ethics; competence and a clear structural vision are benchmarks of successful organizations.

2nd Amendment Sanctuary | That’s one of the topics items listed as a discussion point at the March 3 Borough Council Work Session meeting. The agenda and accompanying packet are posted at the Borough Website.

So, they’re saying this? | But, what is a “market correction?” – MarketWatch

“Hometown Productions Invoice for Display Ad is a Scam: One of our members received an invoice for $609.95 for a display ad for the Lancaster Co-MA-Map/Susquehanna Valley Chamber/PA.  There is no such publication.  We do not know, nor have we ever dealt with Hometown Productions from Arlington, Tx.  DO NOT pay the invoice or call the phone number on the invoice.  THIS IS A SCAM!”

A hoax or a myth? | “The vast majority of tax incentives aimed at attracting and retaining businesses ultimately leave states worse off than if they had done nothing, researchers report.” – Futurity

Thank you, Phil | Today is the last day of an extended February and, we gotta’ say, “Thank you, Punxsutawney Phil. You did a great job so far — let’s do the same for March.”

No more waiting to vote | Now, finally, Pennsylvania’s voters can vote early for any reason. “Pennsylvanians can apply to vote by mail online, and they have until 5 p.m. on April 21 to do so. Election officials must receive mail-in ballots by 8 p.m. on election night. The April 28 primary will be the first election in which Pennsylvanians can vote by mail. It’s also the first primary in which every county in the state will be using new voting machines that provide a paper trail to verify vote totals.”- WITF