And this is how it ends as another news source disappears …

We just returned from Middletown; went there to pick up a print order from the Middletown Press and Journal Publishing Company. It’s been our great fortune to have known the family that’s owned and operated the company for many years. And we grieve at their loss.

While there, we learned that this small-town news source announced atop page 1 in today’s newspaper that it will “publish the last edition of The Press & Journal on July 1, 2020.

Some Columbians will relate to the shock and sorrow that Middletonians are feeling; Columbia lost it’s local newswpaper, The Columbia News, in 1989. A dozen or so years ago, it also lost The Ledger.

Just a week ago, we spoke with the publisher about the dire straits of the newspaper industry; today we spoke with an employee and several folks on the street in downtown Middletown. They are all somber and distressed. 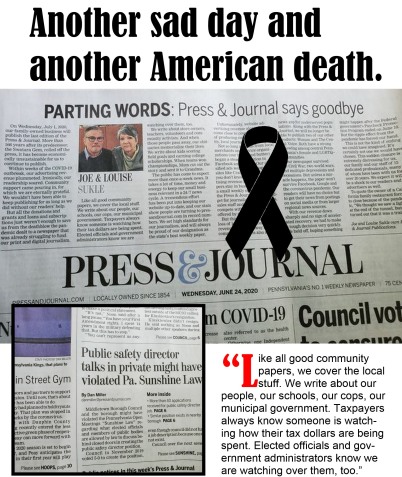 Columbia news, view & reviews will have more to say on the topic of the void of local news sources at a later date. In the meanwhile, read the article: ”