today’s news and information gleanings from here and there!

Quote for today… “The notion that you’re gonna kill all these family sustaining jobs and that somehow people are gonna go out and work for minimum wage at a damn Sheetz, I think, is outrageous.”- Senator Jim Ferlo (D-Allegheny/Westmoreland), during state hearings on the privitizing of liquor sales in the state. – WHTM-TV 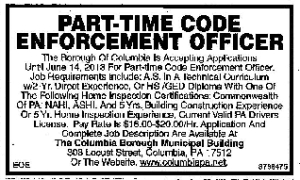 Employment ad in the Merchandiser this week.

“Hedgie’s” at the Library this afternoon.