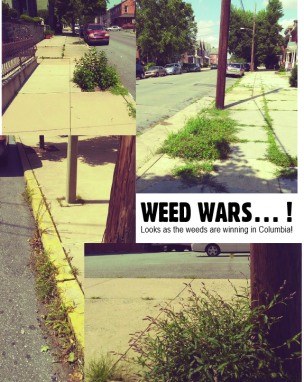 Saturday, though quite hot, was weeding day for us; we decided to weed along the sidewalk, the flower beds and the little garden area. This is one of those years that is a weed’s paradise. Hot or not, the appearance of weeds sends messages of resignation and not caring about the appearance of a property. As do the commenters to this news source and Columbia Spy‘s, we wonder why Columbia’s codes department cannot see what we see: the prevalence of weeds all over the town. High grass and weeds and accumulation of trash are automatic QuickTicket $25.00 ticket immediately is what the Borough Code says.

In March of 2015, in this LNP – Always Lancaster article, the mayor stated Columbia’s police would partner with codes enforcement to tackle codes violations. “Later this month, the borough hopes to roll out a community policing program paired with codes enforcement to address problems head-on. By dividing the borough into three zones, officers will be assigned to patrol one of those zones each day that they work, Lutz said. In addition, the three part-time code enforcement officers that the borough employs will be assigned a zone. Lutz said officers have been asked to get out of their vehicles while on patrol and walk the neighborhoods. This way, he said, residents can get to know the officers and know that they can report any problems directly to that person. Lutz said the program is not expected to cost the borough any additional money; it’s simply better organizing of police and code enforcement officer time.”

“Anomalies abound. Seems ironic to have all the blue painted signage extolling someone to ‘KEEP OUR RIVER CLEAN’ and ‘PROTECT OUR WATER’ when there’s organic matter, cigarette butts and trash serving as flotsam at nearly every grate. – From a Columbia news, views & reveiws, April 2014 news post. 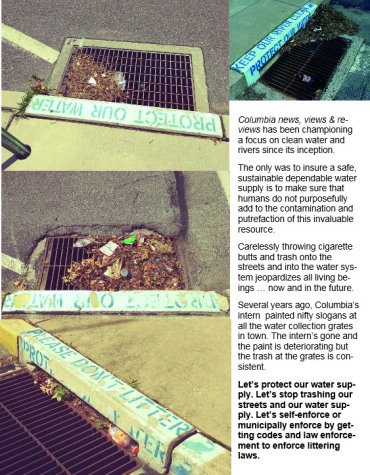 While looking at old Columbia news, views & reviews files, happened across this from three years ago.

There is no military solution in Iraq—so end the threats of U.S. airstrikes, bring home the Special Forces, and turn the aircraft carrier around. (Photo: Jayel Aheram / Flickr) – SOURCE: ForeignPolicyInFocus.org 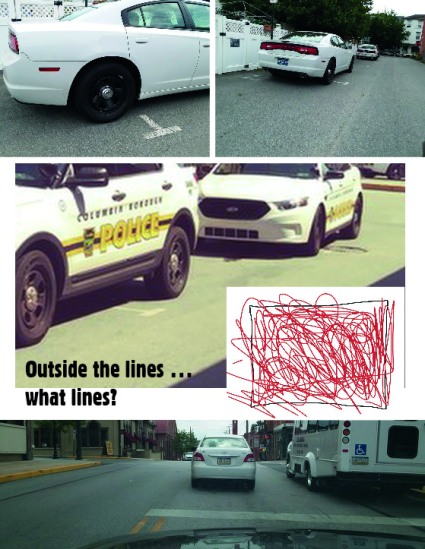 We seem to see lots of evidence of “coloring outside the lines” in town. Wonder, for example, why the car above couldn’t see the white “wide turn” line at the corner of 3rd & Hinkle’s? We did. Wonder, too, why, “law enforcement officers” feel they’re outside the laws of parking within the designated parking lines. 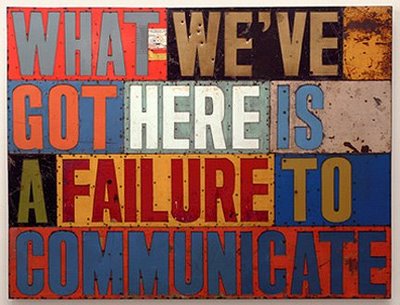 So several media sources reported the water leak and subsequent evacuation of residents at the Susquehanna Valley Nursing facility. Columbia Spy reported it. Lancaster Online reported it. The reports stated that (depending on the source) between 50 and 70 residents were moved to a Harrisburg facility.

What’s disturbing is that no notice about the “critical incident” appears at the Susquehanna Valley Nursing & Rehabilitation Center’s Website. What’s dismaying, is that the facility evidently is unaware of the Guidance for Surveyors, Providers and Suppliers Regarding the New Emergency Preparedness (EP) Rule issued by the Centers for Medicare and Medicaid Services last year. Facilities have to have emergency plans and they have to exercise them.

“The Pennsylvania Department of Health has fined nursing homes more in the first four months of this year than in the previous three years combined, as regulators started using a more rigorous penalty system after coming under fire for going too lightly on substandard care.” – The Morning Call

This LEGAL NOTICE appears at Lancaster Online: A special meeting of the borough council will be held on Monday, July 24, 2017 at 7:00 p.m. to “determining whether to move forward with acquiring real estate” of the property known as the McGinness Airport.

Today’s LNP – Always Lancaster is filled with Government Calendar information from numerous municipalities across the county … and nothing about Columbia. Why does the Borough not have someone assigned as the Public Information Officer? Someone who would be assigned to communicate with the outside media and citizens in an ongoing manner?

Any Columbia dogs on the Pennsylvania Dangerous Dog Registry?

This make the county look bad | “There are more than 300 tier 3 sex offenders in Lancaster County” – Penn Live [NOTE: “Tier 3 offenders, which account for about 12,000 people in the state database, carry a lifetime registry and they must have their photo taken every 90 days. Tier 3 offenses include rape, kidnapping, aggravated indecent assault and incest.”] – The Sentinel, Carlisle

Far more commenters at this facebook string than persons attending School Board meetings.