From the Columbia news, views & reviews archives | a piece on ethics, honesty and truthfulness: still requirements for good governance.

Back in 2011, Columbia news, views & reviews posted this:

Pennsylvania has an ethics statute and the State Ethics Commission is the responsible agency for trying to make sure that the people in government at the state and local levels act in the best interests of the citizens they serve. Each year political candidates seeking office, nominees, elected and appointed public officials, public employees and solicitors truthfully complete the Form SEC-1.  Chapter 11 of the State Ethics Commission code is entitled, “Ethics Stands and Financial Disclosure.” Ostensibly, citizens have a right to know that the public sector persons who work in the citizens’ interests are free from “financial entanglements.”

“The Legislature hereby declares that public office is a public trust and that any effort to realize personal financial gain through public office other than compensation provided by law is a violation of that trust. In order to strengthen the faith and confidence of the people of this Commonwealth in their government, the Legislature further declares that the people have a right to be assured that the financial interests of holders of or nominees or candidates for public office do not conflict with the public trust. Because public confidence in government can best be sustained by assuring the people of the impartiality and honesty of public officials, this chapter shall be liberally construed to promote complete financial disclosure as specified in this chapter. Furthermore, it is recognized that clear guidelines are needed in order to guide public officials and employees in their actions.”

That is relatively straightforward … people need to know that complete financial disclosure is required. The first page of the four page form identifies who needs tofill out the form and states, “The form is considered deficient if any block is not completed, or if signature is missing.” 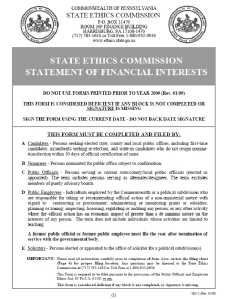 Page 2 of the form provides block-by-block instructions about what must be entered on the statement. It, too, is pretty straightforward. Essentially, it says, be honest about your finances … identify your income streams (above certain thresholds); identify your creditors (again, above certain thresholds) and disclose your affiliations which could be construed as conflicts of interest. 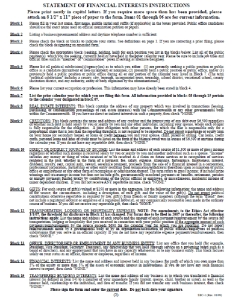 Page three is really simple; persons needing to complete the form each year can access the form online. 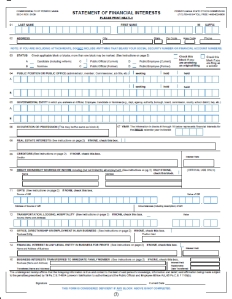 In November, Columbians will be electing people to represent them as borough councilors and school board members. Each of the folks running for office completed the above form.

The truthful and accurate completion of this form, it seems to us, is a foretelling of the ethical representation the aspirant will exhibit when elected. Misrepresentation of data; failure to disclose or “flat-out” deception is an indicator of character or “forgetfulness.”

This is part one of a series; what’s it look like on the local level? More to come.