Almost | Tried the “hot enough to fry an egg” experiment; yesterday was almost.

Programs that work | Boyertown’s Main Street program: “Building a Better Boyertown (BaBB) is a non-profit organization formed in 2002. Boyertown, PA is a Main Street Community, received funding from the Pennsylvania Department of Community and Economic Development and private donors to focus on downtown revitalization.”

Features | a facebook page with updates on the events of the town.

And a borough newsletter | is at the Borough Website 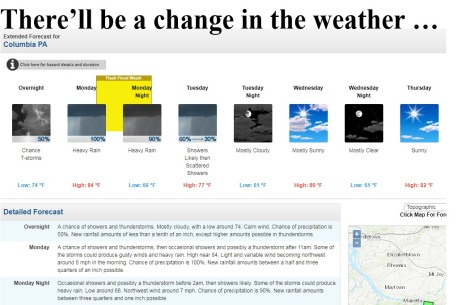 “There’ll Be Some Changes Made” | Another Tony Bennett hit

“For there’s a change in the weather
There’s a change in the sea
So from now on there’ll be in change in me
My walk will be different, my talk and my name
Nothin’ about me is going to be the same
I’m goin’ to change my way of livin’
If that ain’t enough
Then I’ll change the way I strut my stuff
Nobody wants you when you’re old and gray
There’ll be some changes made”
“‘Addictionary: The Opioid Crisis Defined,’ | at the Ware Center Friday through Sunday” – Lancaster Online

What happens then? | “As pensions fail, Congress ponders, and career savings evaporate” – The Morning Call