Wins |Columbia’s boys’ and girls’ basketball teams come away with wins over Annville-Cleona.

Monday night’s SPECIAL MEETING | The information links at the Borough’s Website keeps getting longer and longer as residents and business owners question why the meeting on Monday night at 7:00 pm. Due to the anticipated crowd size, the meeting will be held at the School District Administrative Center at 200 N. Fifth Street, Columbia, PA 17512.

.org used to mean something | This may be changing: “The old dream of an internet run in the public interest has long dissipated under pressure from huge corporations seeking to profit from what has become a worldwide information utility.” What’s it mean when a venture capitalist two-person operation buys the .org domain for $1.135 billion?

Is J.C. Penney next? |as it “staggers” into the holidays.

Yesterday’s hotel post | about the new hotel down the road from Spooky Nook is now posted at Lancaster Online. 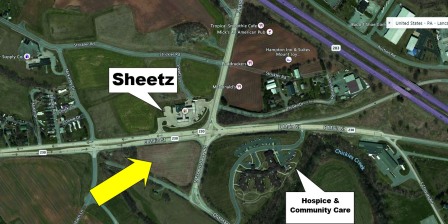 85 room hotel coming | The area around Mount Joy continues to explode with development. On the old Route 230 (across from the Sheetz), according to an article in today’s LNP – Always Lancaster, “The triangular, 4.6 acre site at 1550 E. Main St. (Route 230) is bounded by Esbenshade Road and Old Harrisburg Pike, and across the street from a Sheetz convenience store. With 85 rooms, including 17 suites, the Holiday Inn Express is set to open in summer 2020. It will employ 20 to 25 people during its peak times.”

Next boom town | Willow Street. It’s got senior retirement living, grocery stores, McDonald’s, health care centers, restaurants and now a Sheetz is coming to fill the now vacant corner property that was home to Burkholder’s Quality Cars for so many years.

Choose Topeka | Topeka, Kansas is getting lots of national press (including an wire-story article in today’s LNP – Always Lancaster) about it’s plan to pay people to move to Topeka. “Choose Topeka, is a talent pilot program that will offer matching incentives by partnering with employers to encourage talent to move to Topeka & Shawnee County.”

Death notice | Long-time LNP editor, Bill Cody. Back in the day, Bill was the editor of the morning paper, The Intelligencer-Journal, then the seventh oldest daily newspaper in the United States.

Sickening sound of money | Political candidates know the average American voter is “dummernhell” and easily swayed by slick television campaigns and that’s why TV and radio execs are Scrooge McDuckinly rubbing their grubby hands together. As one said: ““In 2020 we are not going to be able to get out of the way of the money. It’s literally going to be hand over fist.” The Poyntner Institute has this report.

A love letter from your radiator? | Many of us who have or have had radiators in Columbia homes may recognize some of the references in this New Yorker Magazine, piece: “It’s me, your radiator!”

If you were under 40 | … would you vote for one of the oldsters vying to run the country? Or any thing? “The Millennials-Versus-Boomers Fight Divides the Democratic Party.” – The Atlantic

On the other hand | if you’re over 50 or so, why would you not vote for someone who sees only ” … degeneracy, racial mixing, demographic change, ‘political correctness,’ same-sex marriage, religious decline.” Heck, you may want to vote for someone who “looks abroad, seeking to find the spiritually unified, ethnically pure nations that, they imagine, are morally stronger than their own.” This Atlantic article looks at this perspective.