OPINION: everybody, somebody, anybody & nobody 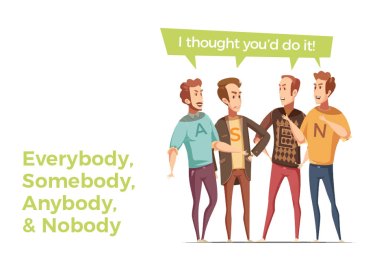 OPINION | At last night’s meeting these words (or synonyms of them) flew from the mouths of several in attendance: somebody, everybody, anybody and nobody. Surely, everyone’s heard “The Story of Everybody, Somebody, Anybody And Nobody.” It seems that the old ways of recollection just keep hanging on. Conversations about the lack of consistency with some in the borough’s codes department over the years and conversations about the random street scuffles and fights as school lets out don’t identify people other than “everybody, somebody, anybody, nobody and those people.”

Accountability and progress are outcomes of planned and sustained growth. For the borough’s leaders to rely on memory and to spout out instances without documentation is meaningless puffery. The documentation comes from the written, audio and video recorded archived files.

For instance, while discussing the borough’s Website there was no documented conversation; only “remembered” ideas of cost and the conditions of the agreement with Revize, Inc; the company that in May of 2018 received council approval in a motion “To approve the (one-year) contract with Revize, Inc. to provide website planning, development, administration and technical support for Columbia Borough at a cost of $9,900.” – All councillors approved a motion by K. Murphy and seconded by T. Burgard.

As of last night, according to Councillor Todd Burgard, the Website is still not functioning; the borough staffer who’s been assigned the task of populating the template that Revize, Inc. purportedly has delivered is working on migrating data from the current site to the updated one.

Yet, at the Revize, Inc. Website, this claim states: “During the site development and set up phase, our data migration team will move all the pages and documents from your current website to the new site. Then your staff can always edit the website  and add pages and documents using the Revize CMS.”

Today, the borough Website is clunky, difficult to navigate and it’s tough finding information. Last night’s discussion about the inconsistent application of codes permeated all night.

It’s tough getting documentation; it’s tough knowing what to believe. It’s really difficult for citizens to have trust in the system when the system appears to be non-transparent and inconsistent.

Certificate of occupancy discussion surfaced last night, too. Several people voiced input, yet none produced documentation. The borough’s certificate of occupancy is codified in this 2017 borough ordinance. Multi-tasking, requisite in today’s world, does allow every councillor, as well as citizens, to have information readily available. Where, incidentally, are the borough purchased laptops for the councillors and the mayor? Why are they not being used?

International Property Maintenance Code discussion, too, happened. In 2017, too, the borough councillors introduced Ordinance 894 in which the borough embraced the 2018 International Property Maintenance Code for all structures in the borough. Challenges arise when there’s a reference to the Code cited by a codes department representative and a citizen has no idea of how to access the code. The borough solicitor suggested last night that there should be a link to the code at the borough’s website; there is none currently. The Code can be purchased at the International Code Council Website for $30.50; many municipalities do purchase the Code and feature it at their Websites.  Here, for instance, what the community of Allentown Boro, NJ does.

We applaud the words of acting borough manager, Candie Johnson, when she said the borough needs to strive for “great Customer Service.”

It needs to value each person; charge each person with responsibilities; challenge each person and hold each person accountable. That’s achievable by providing “Great Customer Service” and holding everyone to the same consistent, transparent standard.

It does take a village with a plan.