birds of a feather | POTUS sides with Biden – The Washington Post

veep thrills | The nation’s vice president chose not to wear a face mask during a visit to a facility recently, claiming he wants to look into the eyes of the people he’s talking with. We’re head scratching on that rationale, but he’d have been in his world at last night’s borough council meeting. In the livestreaming of the meeting, it appears nobody was masked. The absence of masks was observed by several remote viewers who made comments. All the councillors , except Pamela Williams, attended in person. She, the mayor and the borough’s legal counselor attended by telephone. We’re still struggling to understand why Columbia resists video conferencing (which can be livestreamed as well) as other municipalities and school district board of directors do.

You may already had/have it? | “Infected with the coronavirus but not showing symptoms?” – Here are some reasons why: “Blood tests that check for exposure to the coronavirus are starting to come online, and preliminary findings suggest that many people have been infected without knowing it. Even people who do eventually experience the common symptoms of COVID-19 don’t start coughing and spiking fevers the moment they’re infected.” 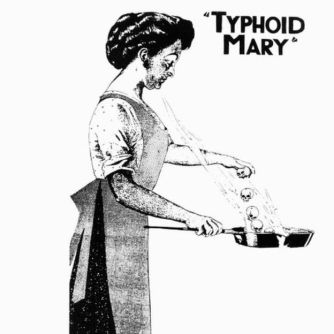 “This illustration from around 1909 shows Typhoid Mary breaking skulls into a skillet.”

Any of us could be | a Typhoid Mary. The above article references “Typhoid” Mary  Mallon, an asymptomatic Typhoid Fever “carrier” according to some. Here’s a BBC article about her; unless tested, any of us could be an unwitting carrier of COVID-19.

Just try to get tested |“Residents with no COVID-19 symptoms seek tests at new Camden County site, are turned away” – WHYY

“May Day marks pain | not celebration for workers hit by virus.” – ABC News

help for the needy | “Hospitals across Pa. get $324 million via loan program; one health system gets $100 million” – The Press & Journal, Middletown, PA

but that’s not all | In conversations with people around the area, we discovered that one person’s deceased (for more than a year) mother received a check. We discovered that several agencies around the state received funding far in excess of their wildest dreams. We’ve been told that agencies were instructed to prepare (in less than two days) a one page document expressing how CARE Act funds might be used. And then the Eagle shit beyond their wildest expectations. Now some of those recipients are asking stakeholders how to spend the money. SMH, again.

and the corporate leaders get … | richer and richer. – Lancaster Online