that can’t be right | “President blows his top in Friday argument and reportedly tells Brad Parscale ‘I’m not f _ _ _ ing losing to Joe Biden’ in November.” – The Guardian 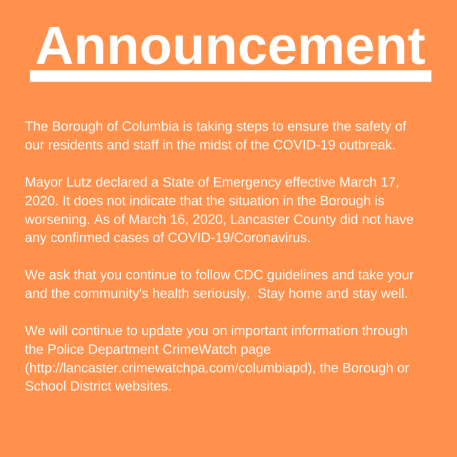 Yes! Every year! | That’s when elected public servants and others in government have to complete the SEC-1 form. Here’s a Columbia news, views & reviews article about that from 2011: “Pennsylvania’s Form SEC-1 … the STATEMENT OF FINANCIAL INTERESTS.”

no layoffs in sight | That’s the word from Columbia Borough’s manager, Mark Stivers, in an article in today’s LNP – Always Lancaster. The article is about layoffs, furloughs and staff reductions in Lancaster County’s larger municipalities.

a May 7 parade | Columbia borough’s councillors discussed and authorized a COVID-19 Emergency Services parade on May 7 at 7:00 pm at last night’s meeting.

In Philadelphia | “A parade that killed thousands?” – Yahoo.com

From the County Treasurer’s Office | “April 2020 Delinquent Tax Report – (Amounts are NOT certified. Total due is subject to change. Interest accrues monthly on the first day of a new month.” 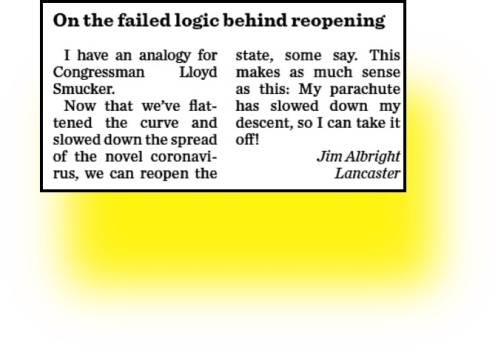 Another blame the media letter | Seems like almost every day there’s a letter-to-the-editor claiming the media is biased. Seemingly, it’s those on the extremist ends of the political ideological spectrum that spout this drivel. The media is responsible for this, that and practically every thing. Here’s one basic resolution to that argument: If you don’t like what’s being published; broadcast or streamed in “the media”,  don’t consume it. Continue to be uninformed. Continue to be racist, xenophobic, homophobic haters. It’s that simple.

John Barry, the author of The Great Influenza, writes this in the afterward of the book:

“In 1918 the lies of officials and of the press (remember, the government manacled the press and told it what it could and could not publish) never allowed the terror (of the pandemic) to condense into the concrete.The public could trust nothing and so they they knew nothing. Society is, ultimately based on trust, as trust broke down people became alienated and only from those in authority, but from each other.

“Those in authority must retain the public’s trust. The way to do that is to distort nothing, to put the best face on nothing, to try to manipulate no one.

“A leader must make whatever horror exists concrete. Only thenb will people be able to break it apart.”

“Online courses free for 10 more days! | Penn State Extension offered free enrollment in more than 50 online courses in the month of April. Interest has been overwhelming, so we have decided to extend the offer to May 10 to ensure you get access to the science-based knowledge you need.”