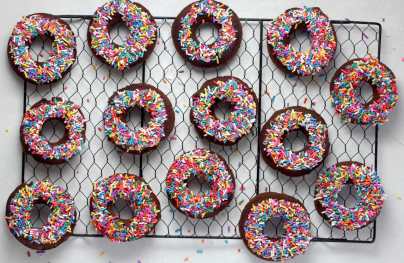 Welcome on the first yellow day | Today is National Donut Day — and it could not have come on a better day.  “On National Donut Day Dunkin’ is offering guests a free classic donut of their choice with the purchase of any beverage.

Another fair canceled | Denver will not have a fair this year.

Election results | It’ll be a few days yet until all the mailed in ballots in last Tuesday’s primary election will be hand tabulated. Meanwhile, you can see results-to-date a the County’s Board of Elections Website. Drill down into the pages there to find out balloting-to-date totals for the political positions at the very grass-roots level. In this “look-alike” party “party” for the two most populated political parties, you can see who’s striving to be the local party chieftains. We don’t know why all citizens are tasked to pay for this partisan insanity; each of the lookalike parties should have to pick up the tab for this tomfoolery.

We are complicit. | “When we do nothing in the face of racism and brutality, we represent Amy Cooper and Derek Chauvin.” – Public Source

more than a “few bad apples” |“…training and interventions that change the way police interact … are needed.” – Futurity

Youth will be served | “Colorado’s youngest black elected official is now the face of Denver’s protests” – 21 year-old Tay Anderson is a Denver school board member and is the “youngest African American ever elected to public office in Colorado.” – The Washington Post

Mayflies will be studied – an article in today’s LNP – Always Lancaster.

Chaos in Wonderland continues  – Letters from an American

Bunker boy | “Is this an authoritarian crackdown by Donald Trump or just another politicized spectacle?” – The New Yorker – Um-m-m, let’s see now … can we think of another nutcase crackpot dictator who went out in a bunker?