TOPO article | From the top-of-page-one article in today’s LNP – Always Lancaster is about “A recurring demand throughout the Lancaster County protests is transparency. Protesters want police officers to be held accountable for their actions.”

Cost of policing | The article states: “The adopted 2020 Lancaster city budget reports that the Lancaster Bureau of Police receives almost 42.8% of the general fund — or $26.85 million.” It’s not a simple task to determine the cost of policing in Columbia Borough using the Borough budget figures. 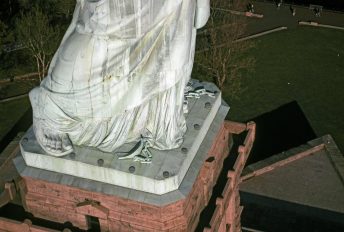 “The anti-slavery symbolism of the Statue of Liberty is an overlooked part of the monument’s history. – Photograph from National Park Service”

Coming home to roost | Another TOPO article reports that “The production of a section of Wednesday’s newspaper (LNP – Always Lancaster) on our new press, in the Greenfield Corporate Center in East Lampeter Township, will mark the first step in resuming our print operations here for the first time since 2015. By month’s end, LNP will print its entire newspaper on the new press.”

One quarter | One out of four cases and deaths from the coronavirus in the world have been in the US. – NOTE: Since we began following the Trump* coronavirus daily numbers announced in mid-March 2020, we’ve been posting Pennsylvania’s numbers of daily COVID-19 cases until recently. Because of numerous other obligations and commitments, we’ve been unable to continue the daily postings. And beginning now, we’re going to post the numbers each Sunday. The numbers are from the Pennsylvania Department of Health Website. The graphics of the numbers will be weekly comparisons, not daily.

* We renamed the COVID-19 (coronavirus disease 2019) as the Trump Coronavirus following POTUS’s lead on March 16 when he tweeted, “The United States will be powerfully supporting those industries, like Airlines and others, that are particularly affected by the Chinese Virus. We will be stronger than ever before!” Then as now, he had no clue about the virulence of the virus. 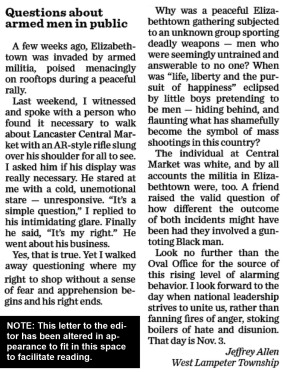 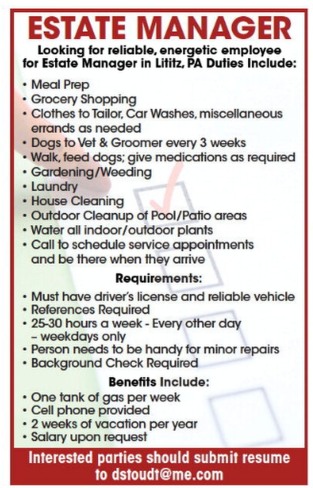 One view of ’Murica | “Class, Race and Power” – CounterPunch