Can you believe it? | High school football games will begin on August 22. “Columbia at York Tech, 10 a.m. — Crimson Tide will head over the river to take on Tech, which will face L-L League entrants Northern Lebanon and Octorara in nonleague games in September. … What to watch: Keep an eye on the QB spot for Columbia, which must replace trigger-man Matt McCleary behind center.” – Lancaster Online

Fire loss | This Lancaster Online article about yesterday’s fire reports that two homes have been condemned.

a string of charges filed | against a man from Columbia in New Holland. – New Holland Police Crimewatch

Extortionist in chief | “In a U-turn, President Donald Trump today said he was open to Microsoft, or another company, buying video-sharing platform TikTok, adding that he believes the government should receive a cut of the purchase price for “making it possible for this deal to happen.” – Yahoo 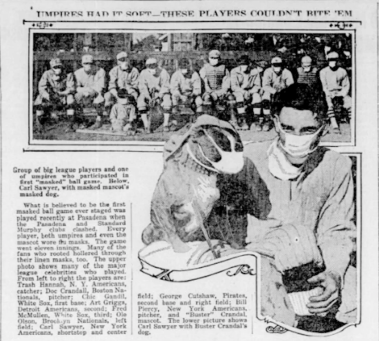 “At right, Carl Sawyer poses with Doc Crandall’s dog, both sporting face coverings on January 26, 1919, in Pasadena, California. The influenza pandemic infected an estimated 500 million around the world.” (Author’s collection)

It’s happened before | During the 1918-19 flu pandemic, they played baseball. – Society  for American Baseball Research – That pandemic lasted 15 months and killed an estimated 50 to 100 million people worldwide and “Here’s what sports looked like during the 1918 Spanish flu pandemic” – Yahoo Sports

“On average, during the pandemic, | households spent $211.34 a week to buy food at supermarkets, grocery stores, online, and other places to be prepared and eaten at home.” More US Census Bureau “Houseolds Pulse”  findings are here.

ethics, schmethics | It’s another slap on the wrist for ethics violations on the part of elected public servants, in this instance a borough councillor in New Holland “participated in 55 votes to approve expenses for borough owned vehicle repairs done by his own business.” The story is in today’s LNP – Always Lancaster. Seems Pennsylvania is built perfectly for slimy politicians. 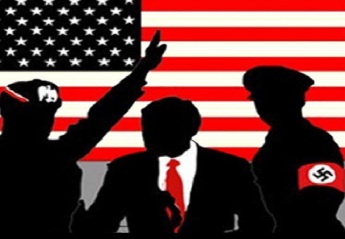 Fascism … is it here? | All the signs say it is. Columbia Spy’s facebook post is a thought-provoking video with Beau of the Fifth Column describing  the  “14 characteristics, 10 stages, and where you are … .” – The comments at the Youtube video are stunningly perceptive; this has to be watched by all those elected public servants who side with fascism, but claim to be patriots.

“When fascism comes to America, it will be wrapped in the flag and carrying a cross.” Sinclair Lewis