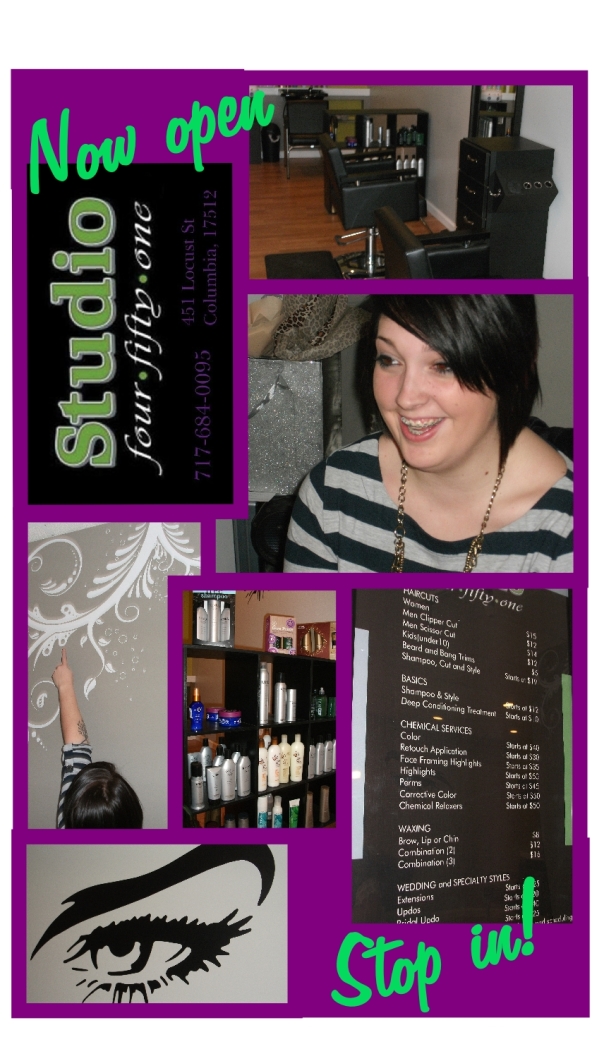 There have been a number of occupants at the building at 451 Locust Street. None of them has added the pizzazz and style that Shanan Snyder has.

Shanan is the owner of Studio four•fifty•one, Columbia’s newest hair styling and personal care salon. Though the salon has been open for just about two months now, this recent article in the Lancaster Intelligencer Journal/New Era stated:

“In Columbia, Studio Four Fifty One has opened at 451 Locust St. The salon offers hair service for men, women and children. Owner Shanan Snyder oversaw renovations of what had been a notary office. The new salon features three stylists. Appointments and walk-ins are accepted. Hours: 9 a.m. to 6 p.m. Monday, Wednesday and Friday, 10 a.m. to 8 p.m. Tuesday and Thursday, 9 a.m. to 3 p.m. Saturday. Phone: 684-0095.”

With a vision; a little help from friends and family and boundless energy and enthusiasm, this recent Columbia resident has transformed the former notary office into an inviting, welcoming  and somewhat elegant salon.

What began as a one-person business has quickly blossomed into Shanan plus two stylists. Business, she says, has been “good.” So good, in fact, that she hurried her plan to add staff; now Shanan and stylists Lindsey Reich and Raquel Miller are the staff of Studio four•fifty•one. One of her stylists used to be her supervisor at another hair cutting site in Centerville.

Shanan hails from the countryside between Mt. Joy and Manheim. She is a recent graduate of Manheim Central; but her expertise and skill come with significant hours of experience as a student in the Cosmetology curriculum at Mt. Joy’s campus of the Lancaster County Career and Technology Center. By accumulating more experience; passing the testing  from the National Occupational Competency Testing Institute (NOCTI) and accumulating lots of practical experience with additional summer hours, she became a licensed cosmetologist after passing qualifying with “hands-on” and theory testing. After working with the Centerville entity for a year-and-a-half, with the encouragement of Columbians Beth and Clair Good, Shanan decided to take the leap and look for a place in Columbia. She loved the Locust Street location and with the assistance of her dad, an electrical contractor; her boyfriend, who works in construction, and her own design talents, Studio four•fifty•one began to take form.

During the renovation phase, Shanan felt very welcome in Columbia as a number of other merchants and shopkeeper neighbors dropped in to lend support and their welcome wishes. Shanan has been a fan and patron of neighbor Gator Zap she is quick to say that the folks at Gator Zap, Columbia Pizza and House of Cutz have been “so-o-o very supportive.”

As the scheduling calendar on her computer screen is filling up, this admitted “salon” groupie – she hung out at her aunt’s salon on Fruitville Pike as a youngster; this accomplished athlete – Shanan played several positions on the Manheim Central girls’ softball team for four years; this Columbia-loving resident is now its newest young entrepreneur.

Shanan, Lindsey and Raquel are eager to meet you. Shanan’s promised to continue to be a Columbia supporter; she’s planning to be open for visitors during Fourth Fridays in Columbia.