Extracted quote | “It can be uncomfortable for journalists to take on government agencies and offices, to risk access to officials by demanding they provide information they are required, by law, to make available.” This sentence comes from the editorial in today’s LNP – Always Lancaster: “The public’s right to know prevails.” The editorial delves into the shielded and shrouded files of government agencies’ information that is information that should be available to all in an open democratic republic.

“hostile and uncooperative” | That’s the narrative in this Columbia Police Department CrimeWatch notice.

“Quality of life inspectors?” | Reading’s considering bringing this back to curb the “disrepair, trash, and overgrown gardens.” – WFMZ-TV69

“Women Making History | “The U.S. Census Bureau has always been ahead of the curve when it comes to employing women. Ever since 1880, when it started using professional enumerators rather than U.S. marshals, the Census Office had employed women in that role. With the advent of the Hollerith tabulating machine in 1890, women moved into the role of keypunchers. By 1909, 10 years before the 19th Amendment granted national women’s suffrage, over 50 percent of the Census Bureau’s 624 employees were
women.” Find out about employment opportunities with Census 2020 and women history makers here.

A first in Columbia | Last night a corner of Rose’s Deli & more was transformed into a Death Cafe. “At a Death Cafe people, often strangers, gather to eat cake, drink tea and discuss death. Our objective is ‘to increase awareness of death with a view to helping people make the most of their (finite) lives’. A Death Cafe is a group directed discussion of death with no agenda, objectives or themes. It is a discussion group rather than a grief support or counselling session.” Rose and her team made a delicious themed cake that was shared among the eleven people who came to the event for nearly two-hours of congenial and open conversations. The Death Cafe was coordinated by the Lancaster County partners’ network of the Pennsylvania Link to Aging and Disability Resources.

Is winning everything? It hurts to win. | Lawsuit suggests that at Penn State – The Daily Collegian

Columbian praised | This letter-to-the-editor in today’s LNP – Always Lancaster lauds a Columbia resident.  Click on the letter to enlarge. 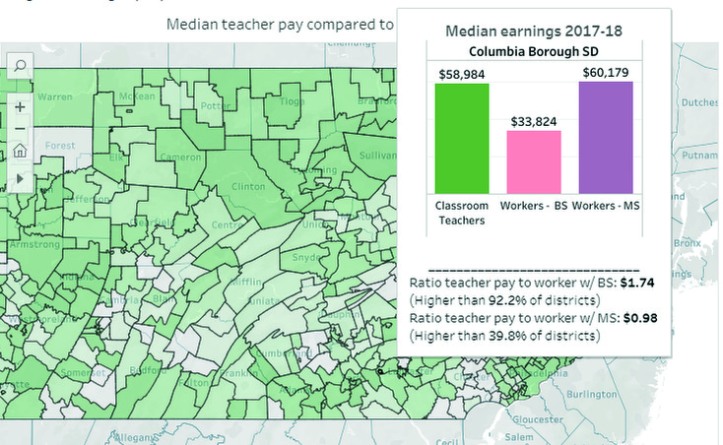