Letter to the editor | We received another letter speaking out against municipalities employing radar: “Pennsylvania Speed Trap Bill SB 607: is it for safety or money?

For safer streets speed limits must be posted at the safest speeds. Those are the 85th Percentile Speeds, the speeds most people drive, determined by a highway safety engineer’s speed study.

But the public does not know this. They are harangued by “safety” advocates saying that “EVERYONE SPEEDS!” (not true) and “STOP THE SPEEDERS!”

The RADAR lobby, whose bottom line is M-O-N-E-Y not safety, wants the too-low, less safe limits to be strictly enforced. This means ticketing the 97+% for driving the safest speeds. It’s a Catch 22. Drive safely, do no harm, and get a ticket.

The RADAR lobby protest that it’s not about the M-O-N-E-Y, that municipalities only get $20 of each ticket. What about the other $140+/ticket? It goes to a laundry list of “good causes,” and directly to Harrisburg. This is a powerful incentive for the Legislature to give RADAR to municipal police.

Why no push for highway safety engineering speed limit studies? Why no push to set speed limits at the safest speeds? Maybe because there is no M-O-N-E-Y in it.

Forno Bova | If you go to an event where there’ll be Forna Bova, jump for joy. We attended a wedding reception yesterday at which Forna Bova was. What a hit handmade fresh pizzas baked in a wood fired oven (forno in Italian) were. This wedding was glamorous, amorous, delicious and bounteous. And the wedding guests has a wondrous treat. 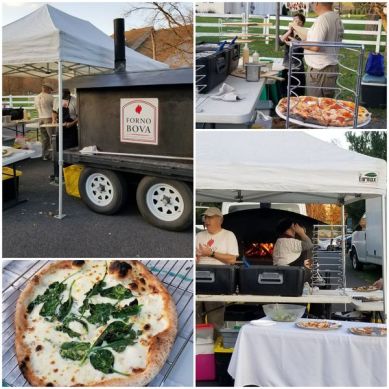 pants on fire | “National Security Adviser Robert O’Brien dismissed as ‘Twitter intel’ the suggestion that more than 100 captured Islamic State fighters escaped from prisons in Syria amid fighting between Turkish soldiers and Syrian Kurds. But that was a figure provided by the secretary of defense and a top official in the State Department.”

Who loses with Medicare for all? | Insurance companies – Common Dreams

Ah, yes, the GOP and its media drones | “Accuse Colonel Vindman, a Jew Who Fled Soviet Persecution, of Dual Loyalty” – The Intercept