Yesterday’s election in Columbia resulted is a definitive signal for a new direction. Voters  resoundingly cast their ballots for candidates who have promised transparency, consistency and open communication with the borough’s citizens.

In the contest for borough councillors, political newcomers Heather Zink, Sharon Lintner, Eric Kauffman and Howard Stevens secured seats on the council which  must reorganize on the first Monday in January of each even numbered year unless it is a holiday.

This voter referendum, signaling a change in practices, was brought about with citizen activism that boiled over when the current council entered into a single user revolving loan account that many say was the catalyst for an ill-timed borough property tax hike of more than 20 percent. The citizen activism resulted in open meetings which led to the formation of the Columbia Concerned Citizens Association (CCCA).

The winning candidates began grass-roots campaigns which included knocking on doors and communicating with citizens in person and using facebook messages. The newly elected persons’ impetus and victory was helped when the mayor of Columbia and an anonymous facebook site sent poison dart messages condemning and maligning their suitability for elected public service. 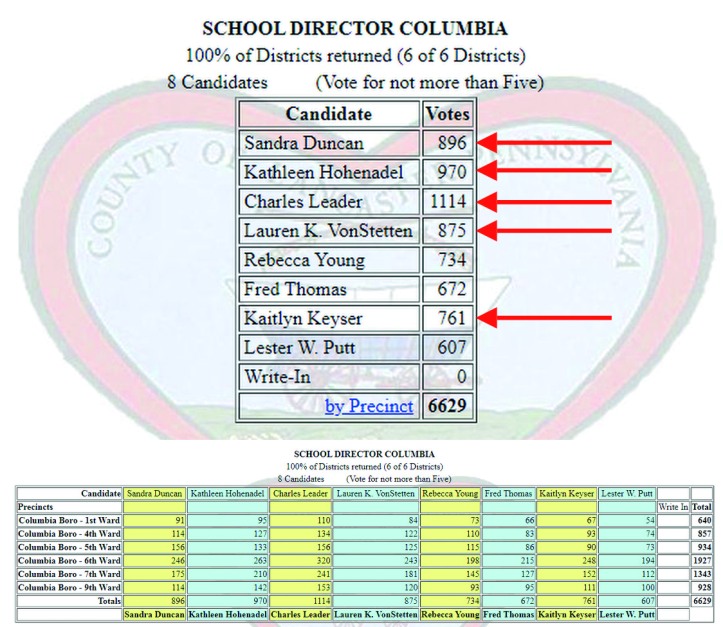 Robert Misciagna was elected in an unopposed Columbia School District two-year school board of director’s race. Misciagnia, is a quasi-political newcomer; he served as a junior borough councillor, but showed true political savvy as he campaigned in textbook style as he knocked on over 1,000 doors in an assiduous effort to listen to people. His facebook comments have been keenly coherent and focused on issues.

Misciagna received the third highest total vote numbers of local office seekers (Leader and Zink got more) in the election.

The above election totals are posted at the County Board of Elections Website along with this notice.