From the Lancaster Online archives, the above graphic is from then November 1, 1918 Lancaster Daily Intelligencer. Click on the graphic to enlarge. Notice the flu deaths item. In the obituary column there were numerous death attributed to influenza.

Spammers and hucksters preyed on people’s gullibility and fears then as now. The above advertisement is from the same issue. 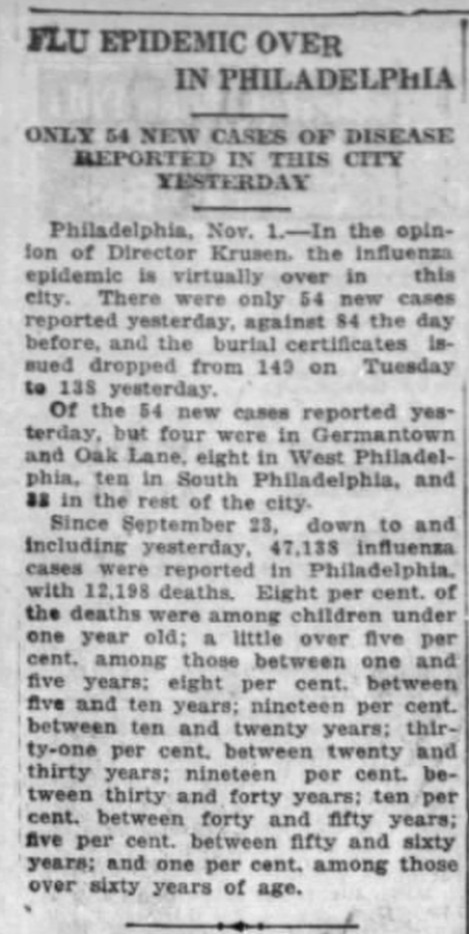 A few pages back in the same issue, this premature and inaccurate article foretold told of the end. How wrong they were?

Just a month before Philadelphia experienced a second wave; and there would be a third.

“As the epidemic heightened, people perished so quickly that the city’s undertakers could not keep up. More than 1,000 bodies were awaiting burial by Oct. 12, adding yet another health concern.

“Many bodies remained inside city homes for days at a time, because family members could not find undertakers or were too ill to take action.

“Bodies spilled out of the city’s morgue, prompting Commonwealth Brewing Company to offer its cold storage plant as a temporary facility for 500 bodies.

“Due to the undertaker shortage, hundreds of city laborers were tasked with digging out graves and constructing coffins. Prisoners were ordered to assist them. And others, including Catholic priests and seminary students, picked up shovels, too.” – Philly Voice