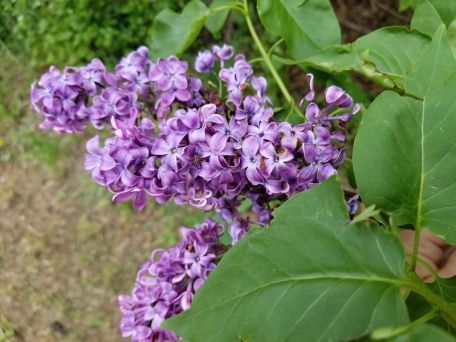 Spring, albeit a cold one now, is here. Brilliant colors and smells along yesterday’s walk.

Potato- po-tah-to | The Prez has referred to the COCID -19 coronavirus as the “Chinese virus” — while we prefer to call it the Trump coronavirus. Wonder where POTUS gets his ideas? The Epoch Times calls it the CCP virus — the Chinese Communist Party virus. Ever wonder where he gets his ideas? From FOX News and those non-mainstreet media friendly to him, of course. The DIC loves suck-ups and “out here” ideas. Read more about The Epoch Times in this post from a few days ago.

“Extraordinary Popular Delusions” – The Epoch Times is staffed with bright, young, attractive Caucasians – but they sing the song of China. That gives cause for concern – whose side is POTUS on? Read this opinion column.

from Marketplace | “Working hours have been slashed and incomes are declining nationally. What’s on the rise? Economic anxiety, according to our latest Marketplace-Edison Research Poll, which reported the highest survey-to-survey spike since the series began. The survey asked people across America how they’ve been coping in the grip of the COVID-19 crisis. Here are some of the highlights. 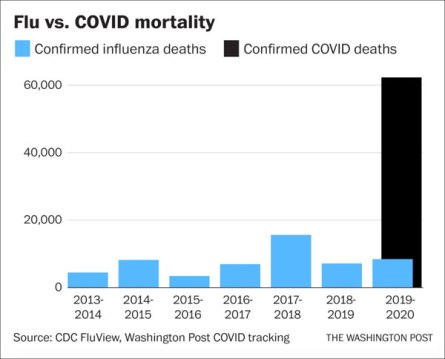 Denier and “alternate truths” | The above “cute” graphic demonstrates the harsh statistics of flu vs. COVID-19. It’s from this Fast Forward column, the advance daily email from The Boston Globe. 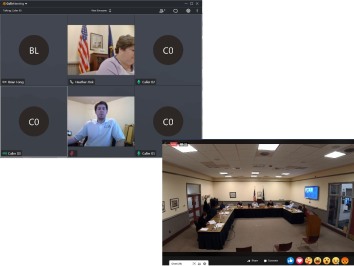 After a little unsteady start, tonight’s Columbia Borough Council work session is in gear and rolling. The meeting’s live on GoToMeeting and live-streamed to the borough’s facebook page. A kind of giant step to keeping citizens informed; way ahead of Ephrata. Yay.

The audio is definitely much better on GoToMeeting.

Wonder why,though, the councillor not attending isn’t connected via computer. Same for the Police Chief and the other unidentified callers. A real value of video meeting platforms is the ability to see collaborating partners.

The borough manager just outlined a great idea; citizens’ comments should be connected to the discussion of the agenda item. They should not have to wait until an afterthought of the meeting. Excellent discussion among the councillors, too.

The council president said that meeting formats are in the Borough Code. I the code, it states: “Public comment will be allowed by Borough Council in accordance with Pennsylvania law at such times during stated meetings as Council shall, from time to time, deem appropriate.”

Like the point that transparency is an ultimate goal.

Oh, this is good conversation and this council that is headed to a place that may lead to the dissolution of the pre-meeting “dress-rehearsal” meeting. Semantics, semantics. Some councillors refer to them as information sessions. The solicitor chimed in that the pre-meeting meetings are not the norm in other municipalities.

Lines are being drawn; the holdover councillors want the rehearsal meetings; the ones elected last November and the solicitor and the borough manager want to discontinue them.

Councillor Kauffman made a valid point when he said that not every action needs to be rush voted. He said that “tabling” some actions for more discovery makes sense.