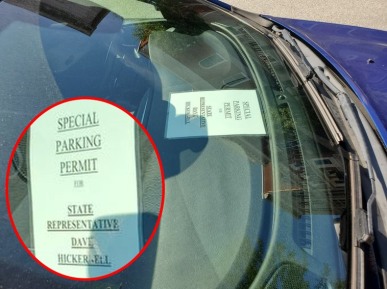 “It ain’t who know …”  | Yeah, it is! There’s an old oft-cited saw that says, “It ain’t who know …”, but evidently in Columbia — it is. Seems someone at this state legislator’s office can craft a hand made sign and stick it in his/her vehicle. Apparently, that’s enough to warrant a “hands off” from Columbia’s parking meter persons. We feel silly; we paid the meter. Downtown shoppers (we were one on Monday), persons doing business and visitors, pay heed, you may want to knock our some signs and see if the consistency applies.

First you say you will, then you won’t | Flip-floppery 101: “In reversal, Trump urges mask use, warns coronavirus pandemic will get worse.” – WITF

Take the Columbia Climate Survey! | You could be the one lucky respondent will win at least a $100 cash prize! 35 surveys recorded to date.

The bucks in being a not-for-profit | are illustrated in this Public Source article: “How fast has UPMC grown? The answer in four charts.” That may be just the tip of the iceberg because the IRS reporting that not-for-profit entities have to file are sketchy at best. To see how sketchy, sometime, take a look at the IRS 990s filed by some local organizations claiming to be a “not-for-profit.” Even though some are not recognized by the IRS as not-for-profits.

“Expert: Swap some cops for pros who vow ‘first, do no harm’ | “This country sends officers to deal with too many social problems …” – Futurity

And this is justice | Fallen from grace former state legislator Lebanon County’s Mike Folmer will be going to jail for “one to two years” after being convicted of “possession of child pornography.” That’s far less a sentence than other not so privileged folks get. Another example of haughty deference that “elected public servants” get from the “justice” system.