They paved paradise | and put up a parking lot. That was one of the areas discussed at last night’s Borough Council work session; it’s archived at the borough facebook page. Watch it and join the other 380 people who watched last night. 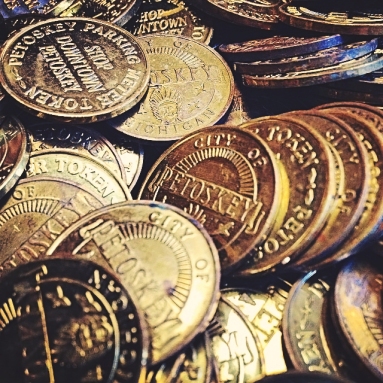 Parking tokens | Just one of the tools in the parking plan and program in this Michigan town.

Insurrection rules | It’s sounding more and more like it won’t be long now until the grand experiment will come to a close; there are so many acts of insurrection — this country, state and county are looking increasing “Balkanized.”The LNP – Always Lancaster editorial today is a statement about the decrypting of police radio signals.

“Lancaster County will not open up police communications for the public to hear, the Board of Commissioners decided on Tuesday,” LNP | LancasterOnline’s Carter Walker reported for Wednesday’s edition. Following widespread and impassioned local protests for police reform, the Lancaster County commissioners, led by a proposal from Democratic Commissioner Craig Lehman, had been considering the reversal of a 2017 decision that restricted public access to police communications. But Tuesday, Republican Commissioners Josh Parsons and Ray D’Agostino sided in favor of the status quo and continuing with encryption.

“Kevin McCarthy, East Earl Police chief and president of the Lancaster County Chiefs of Police Association, said at the meeting that if the commissioners had decided to end encryption, his membership would not have complied.

“’The chiefs association voted that the radios won’t be touched,’ McCarthy said.

“'(McCarthy) later explained he meant they would not have handed over their radios in the event the decision had gone the other way,’ Walker reported.

‘We find that attitude of defiance, even if it’s regarding something that didn’t come to pass, incredibly troubling.

‘There is a credibility gap between law enforcement and the general public. Reforms, including better transparency, are needed to bridge that gap and work toward a more just society. It will not help us move forward if law enforcement pushes back — or outright rejects — reforms that are agreed upon by elected officials.’

And people wonder why Pennslvania is losing population? | It’s not hard to understand; just look at this from today’s Penn Live: “Harrisburg residents want review board over police but state law doesn’t allow it.” It’s a real “fox in the henhouse” scenario when agencies get to be their own bosses with no accountability to the people who fund them and employ them.

“There are other records that are public, including statistical reports, but those reports are only available to the public if they already exist. That means, if a department doesn’t have a document that tracks officers’ use of force, for example, a public request can’t compel the department to create one.

“But if the department monitors use of force, or response times to 911 calls, etc. then those reports would be public.”

Interestingly, in York | York’s mayor says, “When you add in the fact that we are increasing the oversight of our police officers, there will be some who do not want oversight.” This comment is in this York Dispatch report about a disgruntled police officer who resigned in protest. That’s one way to voice disapproval with a system rather than work to change it.

Also from The York Dispatch | “Dentsply to shutter York facility, lay off 200 employees.”